Allegheny County officials announced Tuesday that 272 Canada geese were captured in North Park and exterminated last weekend -- despite promises to avoid lethal means of controlling the birds and their feces.

The action, conducted early Friday and Saturday by five federal Department of Agriculture officials, was the boldest step in a decade-long battle to manage the roughly 700 geese at the 3,010-acre county park.

Officials have addled hundreds of Canada goose eggs -- killing the birds before they hatch -- since at least 2000, but that and other measures have not worked to contain the bird's growing numbers, said parks Director Andrew G. Baechle.

"We're hoping this was a one-time correction to the Canada geese population in the park," Baechle said in a prepared statement.

Animal-rights groups quickly attacked the move, which they called a violation of earlier pledges to avoid euthanasia.

"Extermination was not the answer, and it is not going to be the answer," said Peter McKosky, 26, of the North Side, a wildlife coordinator with Voices for Animals of Western Pennsylvania. "They lied about what they were going to do. And now they're going to have to deal with a lot of ongoing controversy from people who appreciated the geese being there."

"Next June or next May, they'll get another crop of geese coming in from another place that will know nothing of this roundup," said David Feld of GeesePeace, a Virginia-based group that advocates nonlethal means of controlling the birds.

People for the Ethical Treatment of Animals, in the meantime, objects to officials referring to last week's action as "euthanasia."

"That is not euthanasia. That is slaughtering those animals. That is massacring those animals," said Stephanie Boyles, a PETA wildlife biologist. "The word 'euthanasia' means 'good death' -- (and) what they did was not that. They sent them to a USDA slaughterhouse, and a death there is anything but humane."

Baechle said the county paid $7 to process each bird after they were "euthanized humanely." If the bird's flesh is free of contaminants, it will be donated to local food shelters. He declined to comment further.

USDA officials could not be reached late yesterday.

It is deplorable and inexcusable that the word "euthanasia" is now being used to include grievous bodily harm with the intention to cause great suffering and death of healthy Canada geese.

The correct word should be massacre, mass slaughter, extermination, or murder. 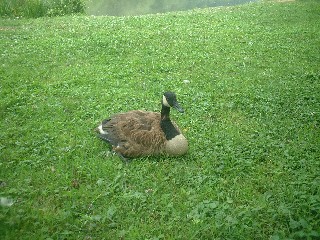 According to the Post-Gazette Editorial, "No harm, no fowl: The county was right to thin the goose flock," July 21, 2007, Emily was just a public nuisance, and should be killed.

Emily is a Canada Goose who I rescued last year and nursed back to health.  I live in North Park, which is right at the Lake.  I knew nothing about geese before helping Emily.  After spending so much time with her, I learned how intelligent, affectionate and trusting a goose can be.  I have no doubt that the bond we developed would have lasted for life.

It was so rewarding to see Emily healthy again.  She would come to visit me every day, and I looked forward to seeing her.  She even recognized my car.

Dan Onorato said that, "No geese will be killed,” so I believed Emily was safe.  If I knew that he would go back on his word, I would have rescued her and taken her to a sanctuary.

I woke up last Wednesday to read that 272 geese were killed at North Park.  I ran out looking for Emily.  I fearfully drove around the lake searching for her.  I didn't see any geese.  They were gone.  They killed them all overnight!  I waited Thursday and Friday hoping that Emily escaped and would come back to visit me like always.  She never came.

Emily may have only been a public nuisance to the Post Gazette, but I loved her.