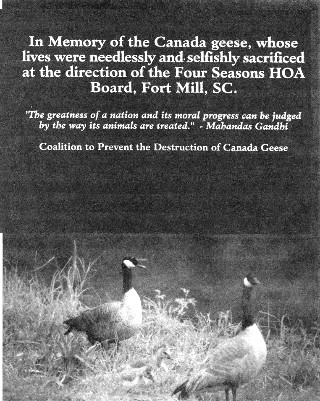 Do what's right for the geese

There's a - ahem - sticky situation taking shape at the Four Seasons retirement community off Gold Hill Road in Fort Mill Township. Residents there are divided over how to handle a rather large flock of geese taking up residence at the neighborhood's ponds.

The homeowners association is contracting with the USDA to have the flock, which numbers somewhere between 20 and 30 birds, captured and removed for slaughter later this month. Other Four Seasons residents, upset by the prospect of the imminent destruction of the flock, hope to change the HOA's mind before the project gets underway.

We support those homeowners who want to take a more humane approach to the problem.

And we realize it is a problem. Although the geese are reportedly docile, they are collectively responsible for about 40 pounds of poop they excrete each day. Anyone who has ever had to navigate their way through a field of goose droppings would agree it's a lot nicer to stroll around without having to to keep your eyes glued to the ground.

However, that doesn't mean it's a good idea to euthanize a flock of healthy birds. To the HOA's credit, it did try to deter the flock by installing wire fencing around the ponds and addling some of the eggs before they hatched. But some experts claim those efforts need to be done in conjunction to get the desired result. Also, the HOA says it wouldn't consider the tried and true method of hiring border collies to patrol the grounds because it's more than double the $1,500 it plans to pay the USDA to remove and kill the geese. Perhaps residents opposed to the slaughter would be willing to chip in the extra cost. They at least should be given that opportunity.

Although we sympathize with residents who see the geese as a nuisance, consideration should be given as to why wildlife encroaches on residential property. Critters of all types inhabited these parts long before the land development boom got underway, and they're simply trying to exist with their human neighbors as best they can.

Sure, humans have the ways and means to rid the area of wildlife. But that would be a sad and unjust response to the problem. It would be much better to merge our intellect and generally compassionate hearts to find a humane compromise.

Geese in crosshairs of debate

Some in Fort Mill want droppings eliminated, and birds, too

Some Fort Mill residents tired of Canada geese soiling their sidewalks, driveways and lawns have decided the geese must pay for the damage -- with their lives.

At Four Seasons at Gold Hill, a 55-plus community in Fort Mill, residents are divided about what to do about geese who live in the retaining ponds on the development.

Some residents want to call in the U.S. Department of Agriculture, which would kill the geese, or as it says, "process" them.

Other residents want to use nonlethal ways of scaring away the 20 geese, perhaps with border collies trained to chase them.

The geese are year-round residents of the area, not migratory.

The problem with the geese, residents say, is they come up from the banks of the pond and defecate on the road, the sidewalks, the driveways.

"The residents are really complaining with all of the defecating going on," said Bill Leggitt, the vice president of the homeowner's board at Four Seasons in Fort Mill.

Leggitt said the group had tried silhouettes of dogs, plastic owls, using a starter-pistol-like gun to scare them. He said to bring dogs in to get the geese out would take weeks of visits and thousands of dollars.

The next option was to bring in the Wildlife Services of the U.S. Department of Agriculture, which specializes in animal control.

Noel Myers, the S.C. director for Wildlife Services in Columbia, said that when they capture the geese, they're taken to a "processing facility." He refuses to say "slaughterhouse." The goose meat is given to charitable organizations, he said.

But some residents don't want the geese made into meat.

Carol Cooper, 69, who lives near one of the retaining ponds, believes there is an acceptable way to rid the community of the geese without killing them.

"We just feel this is inhumane," said Cooper, who favors bringing in border collies to chase away the geese. "We just don't want to see the geese killed."

Cooper may be in the minority. The homeowner's board voted to begin the permitting process to kill the geese, which starts with the S.C. Department of Natural Resources, then goes to the U.S. Fish and Wildlife Service, which then puts out a contract for the job with the Wildlife Services division of the USDA.

Myers said he had received four requests to take care of problem geese in the previous week. This is peak time for "processing" geese, Myers said, when the goslings are hatched and growing up, creating more nuisances for people.

The problem with the geese ranges up and down the Eastern seaboard. As the USDA has taken steps to kill the geese, a group called the Coalition to Prevent the Destruction of Canada Geese has spread its wings.

Sharon Pawlak, the national coordinator for the coalition in Medford, N.J., advocates the use of nonlethal methods to get rid of the geese.

"The killing is perpetrated just because they do what comes naturally," Pawlak said.

And saying the meat goes to charitable organizations is a ploy by the USDA, Pawlak said.

"It's just an excuse to make the roundup more palatable," she said.

1. Please write a letter to the Editor of the Fort Mill Times to add your voice of opposition to the HOA's decision to have the USDA remove the geese for slaughter. Write to: news@fortmilltimes.com